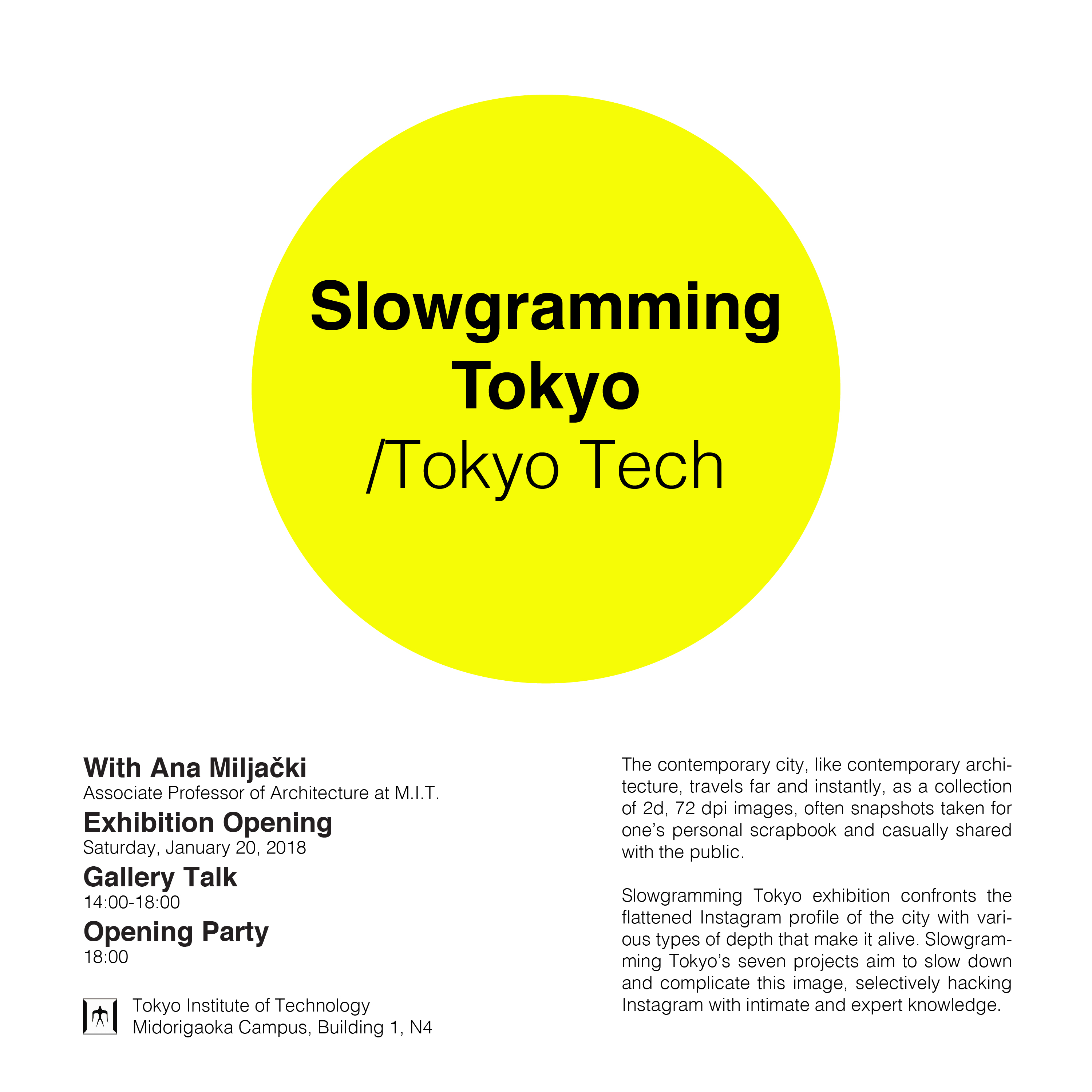 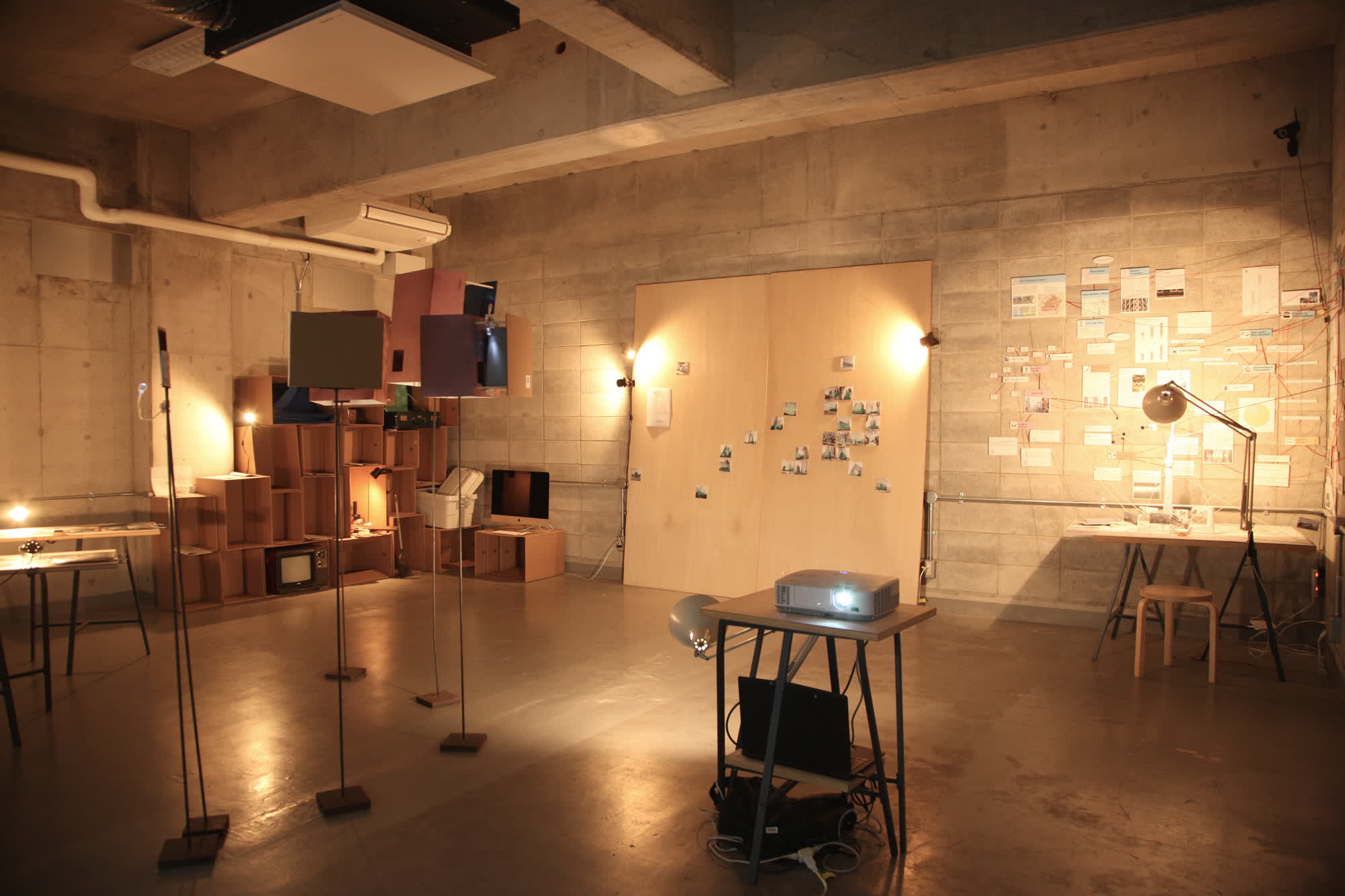 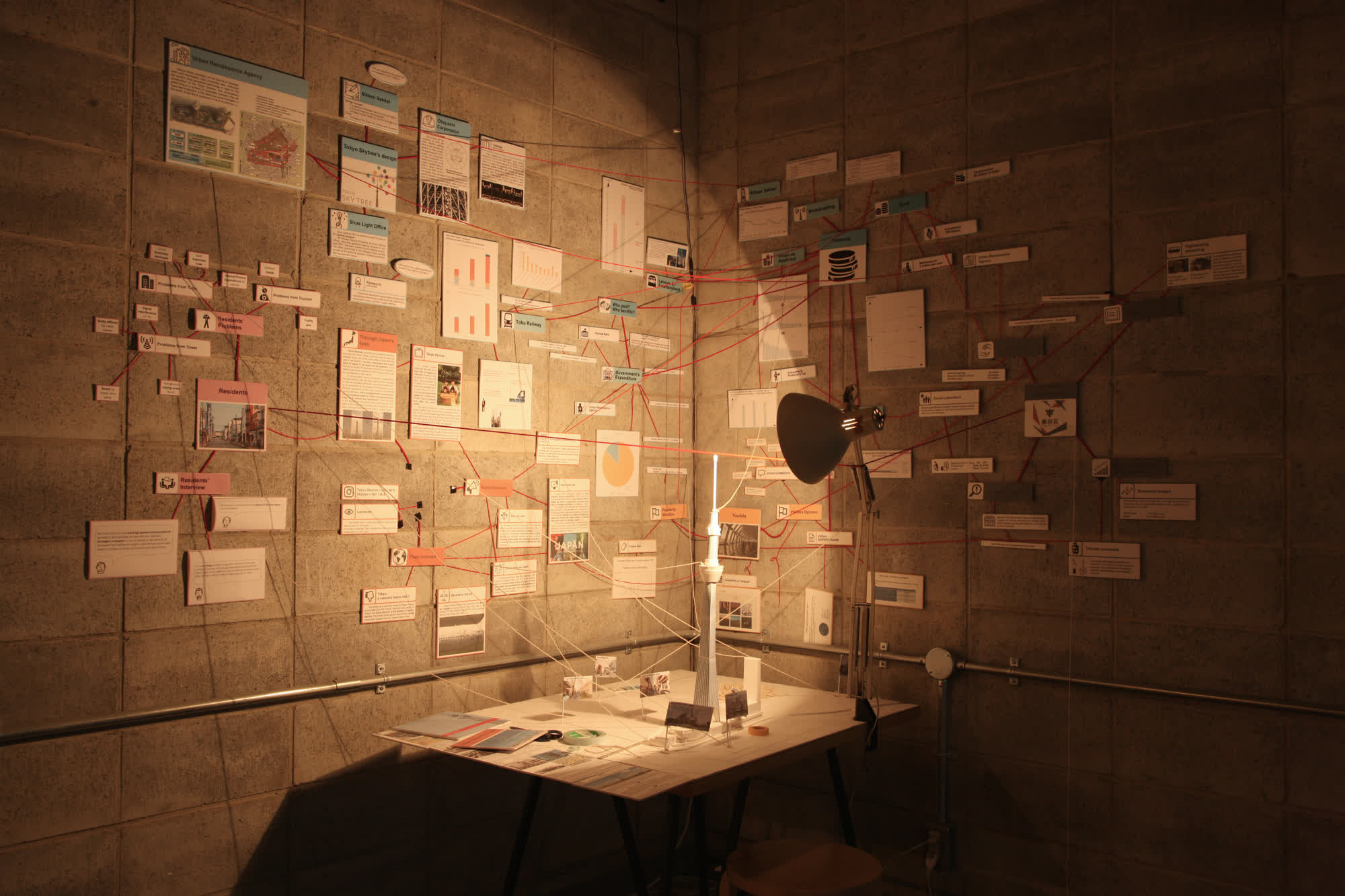 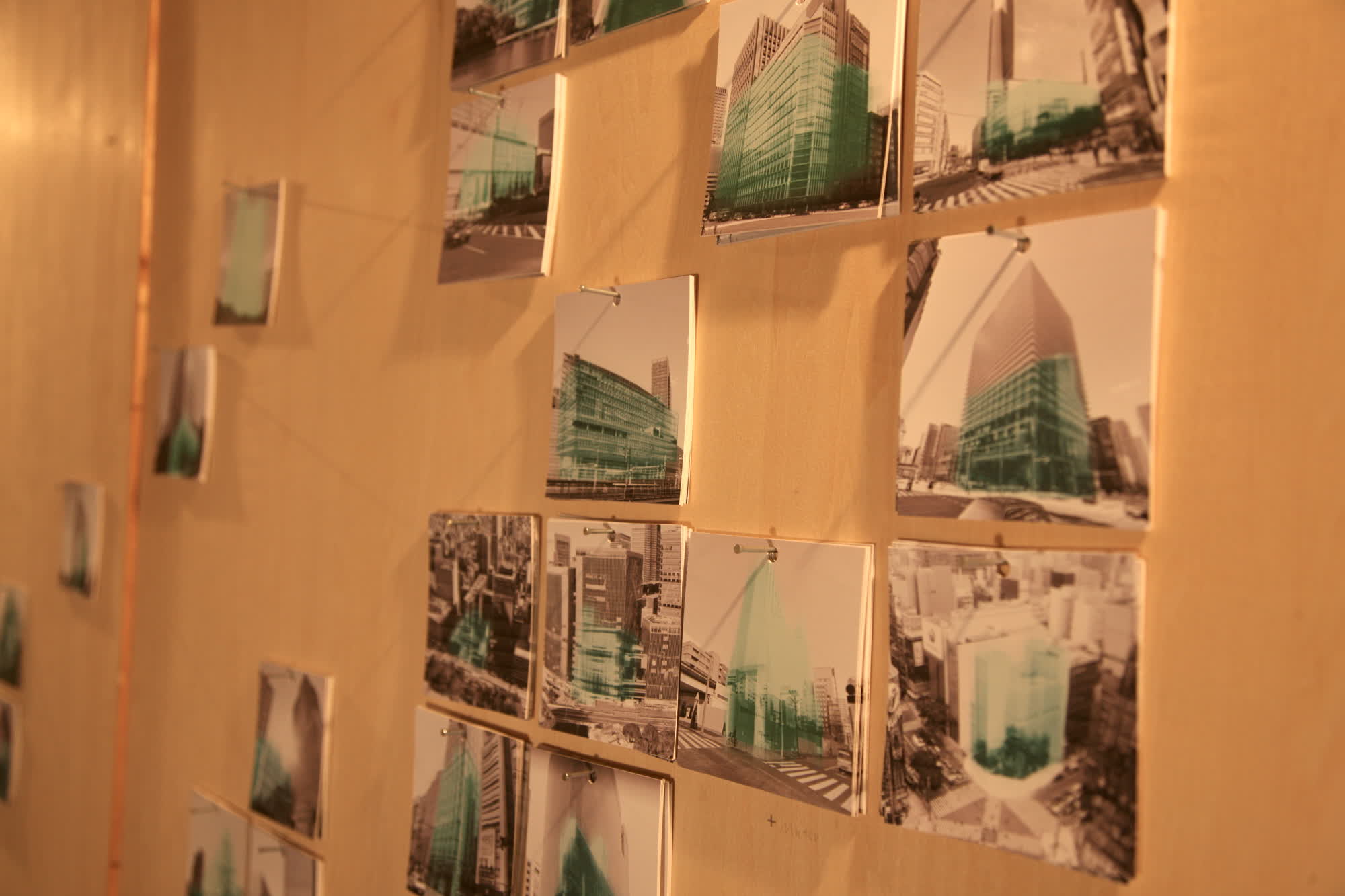 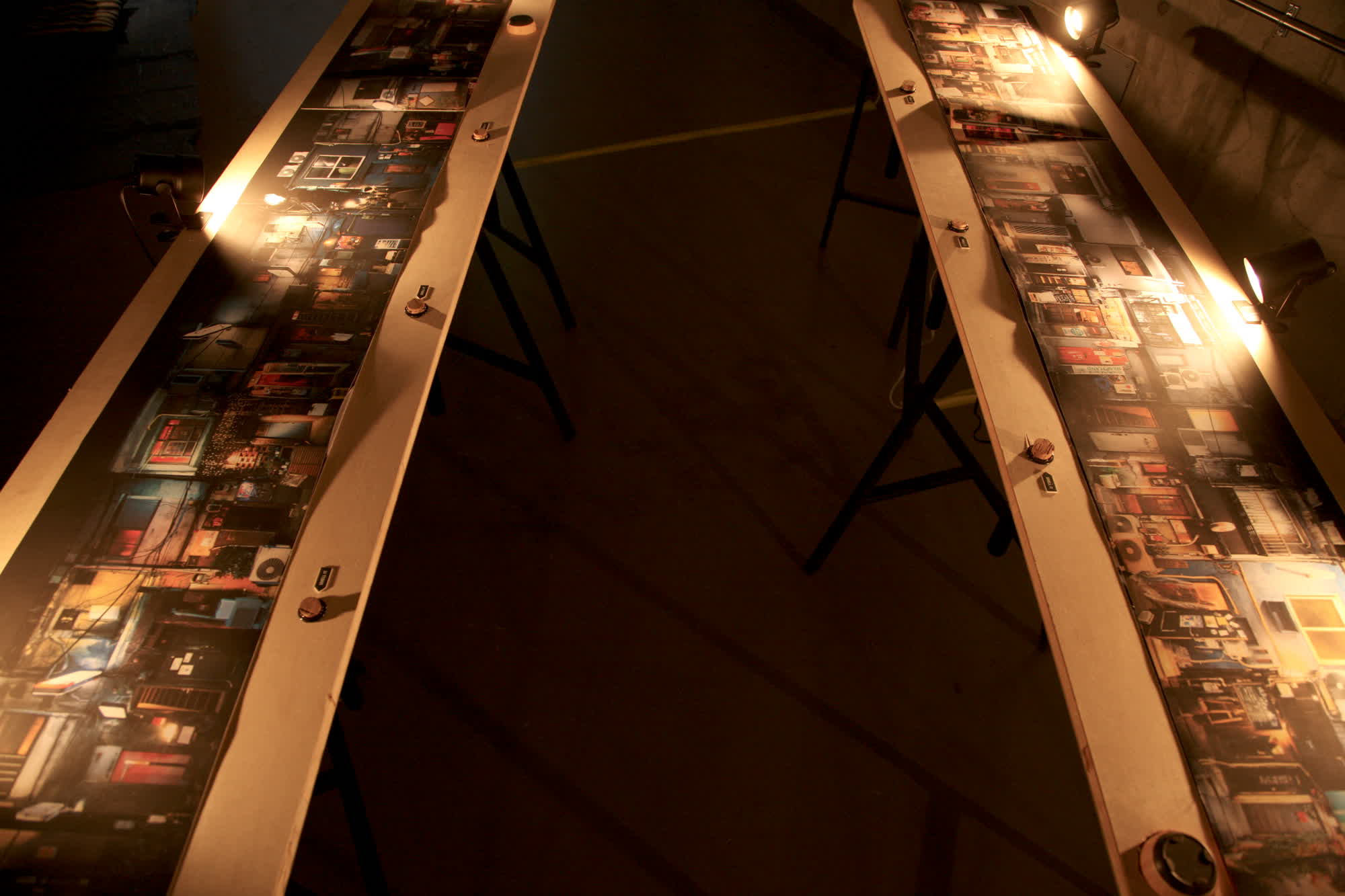 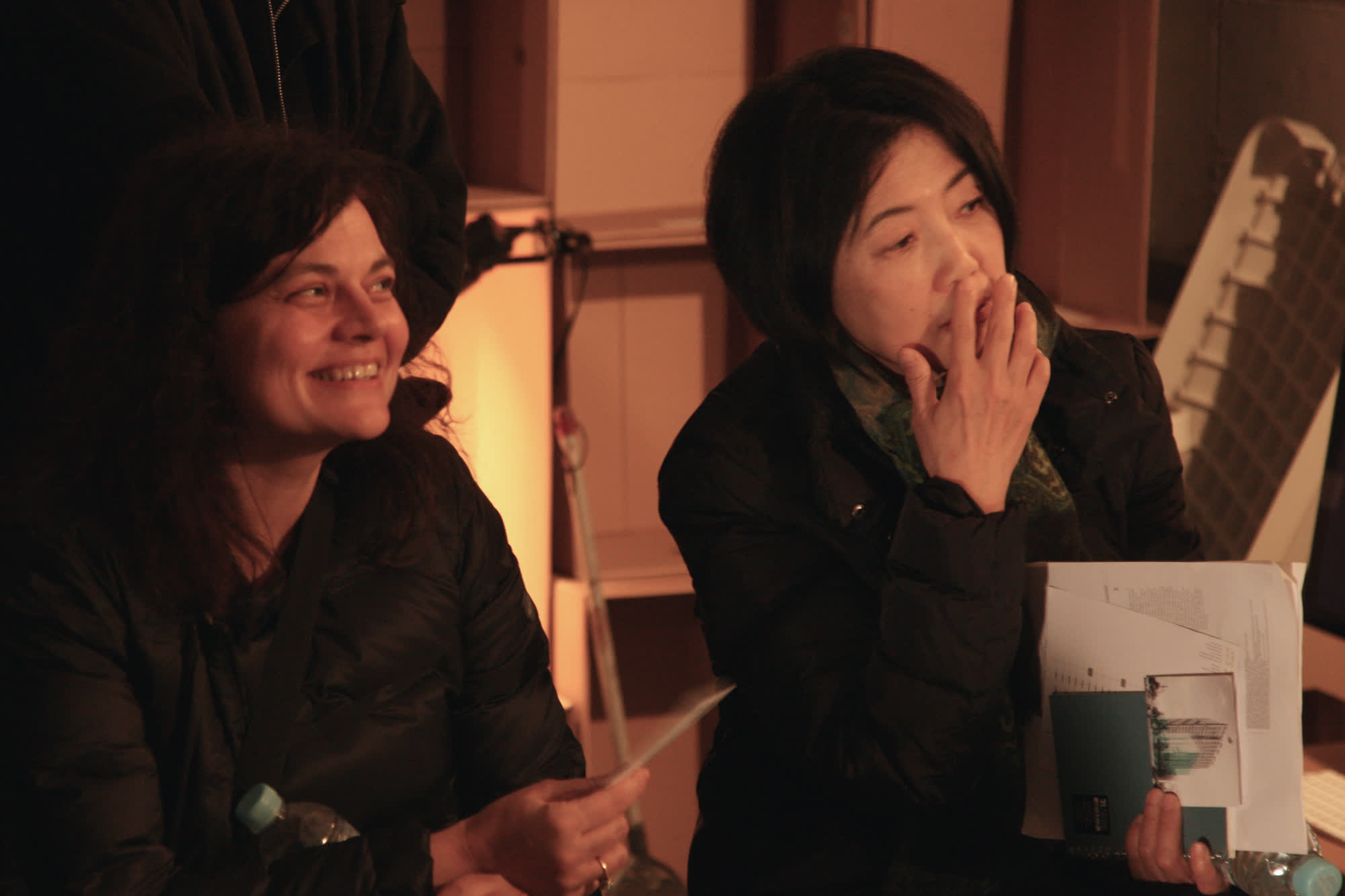 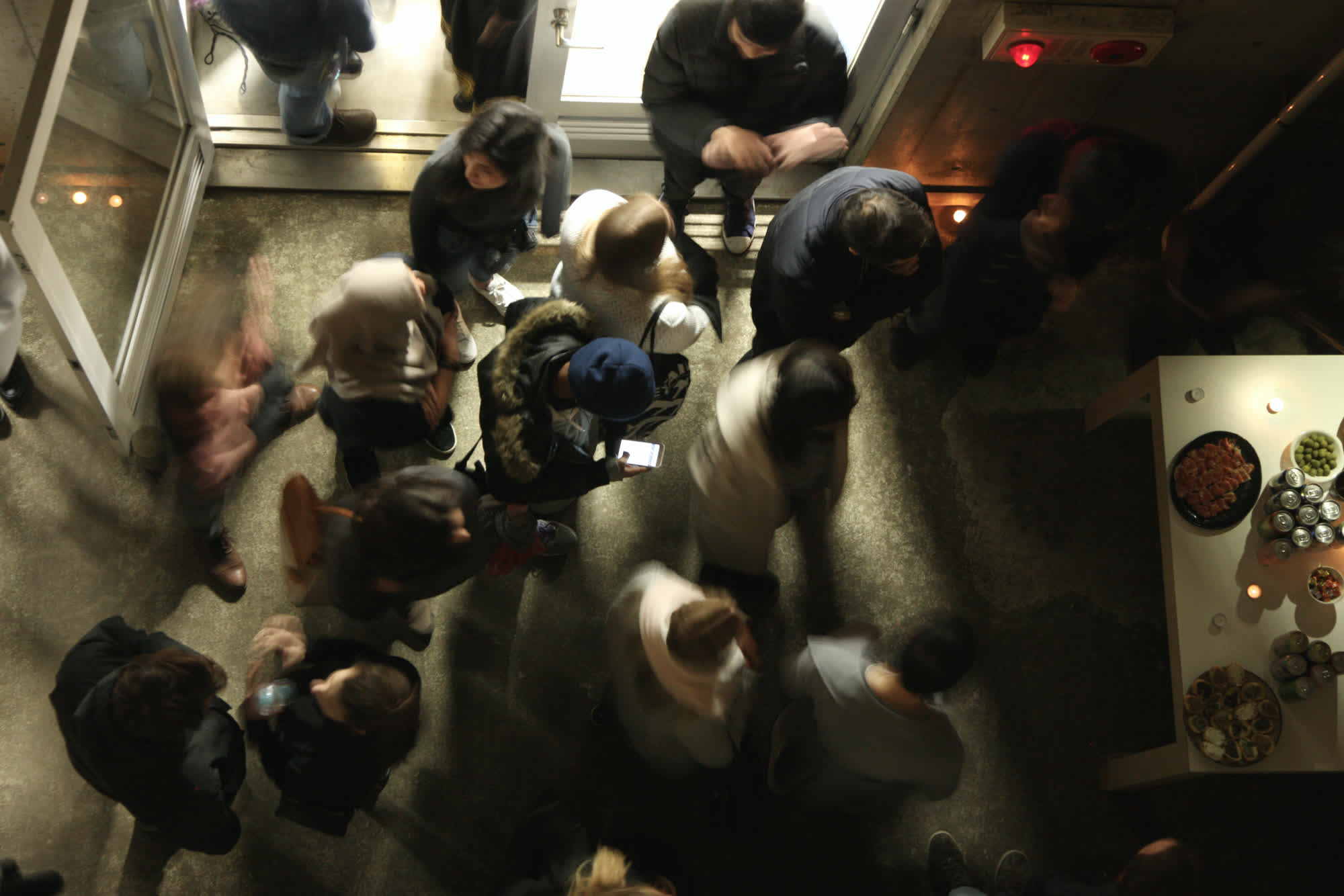 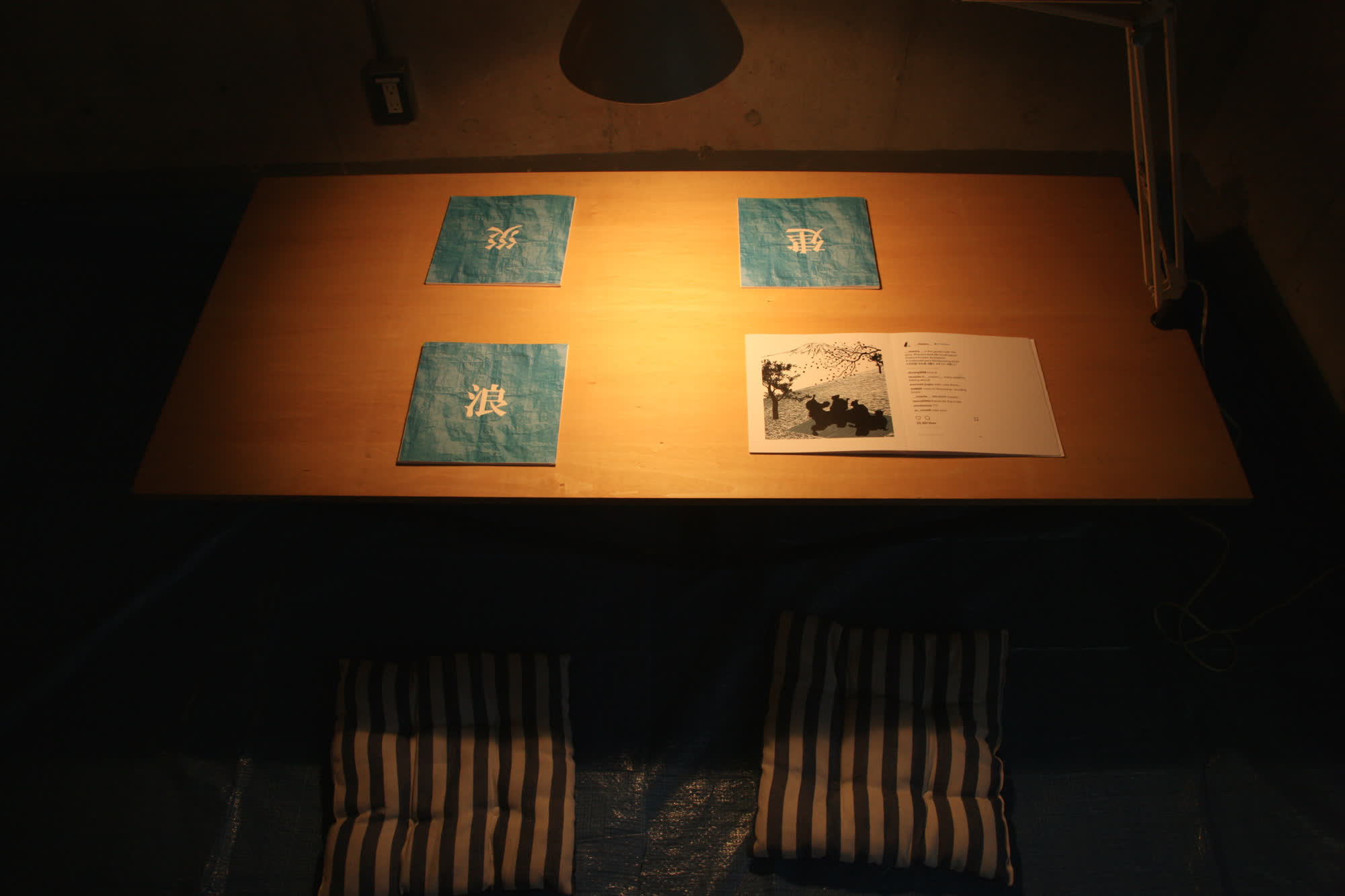 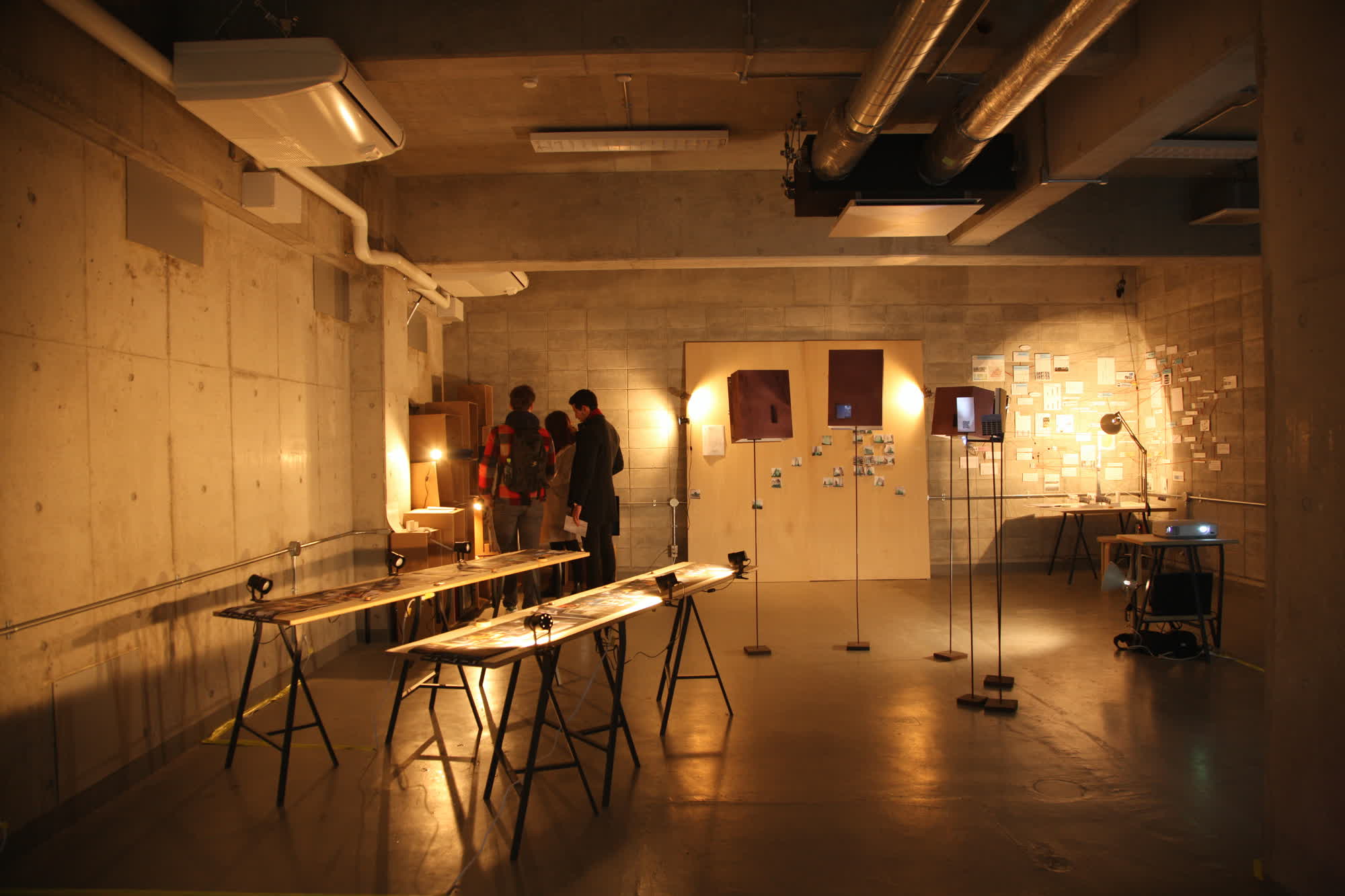 Cut fast (or slowly) between these: larger than life images of teen idols in bright cyberpunk neon, William Gibson’s scenes of seedy capsule hotels, and various slightly suspect activities revolving around some archetypal 7-eleven. Haruki Murakami’s comfortingly familiar (if stale) fog of noodle bar vapors, a series of lovingly personal metro stations, the absentminded faces of cram school teachers, and the precisely measured subway routines of a plausible massage therapist.[1] Then, manga-inspired images from a decades old book of beautiful drawings: Brian Boigon’s Speedreading Tokyo; a pan across stacks of maneki-neko cats frenziedly waving their paws captured by the cat-loving director Chris Marker; the deceivingly simple, translucent axons of Made in Tokyo and Pet Architectures, the yellowing images of the Osaka Expo, Project Japan’s intimate slice of Metabolist dreams, aggregating across the Tokyo bay…these were other people’s sensations, interventions in the realm of the city’s image that have fully framed my own experiences.[2] I recognize them as I walk around, the way a lover might “recognize” the shape of their loved one in the gestures of strangers. Tokyo is not alone in this. All cities are framed for us by experiences of others, rendered and transmitted in various forms of aesthetic products. Thati s how we know intimately that culture is transformative; and it is transformative even when its influence is harder to discern—subtler, less intentional.

For our Slowgramming Tokyo workshop, with many of our participants freshly arriving to the city and a few key ones with intimate knowledge of it, we responded to the contemporary phenomena of private image dissemination (at unprecedented speed) across social media. Instagram seemed like a pleasantly stylized encapsulation of this phenomenon, its square images an approximation of the indexical nature and immediacy of Polaroids, but now inhabiting that “consensual hallucination” that Gibson dubbed “cyberspace”in the early 1980s.[3] Cyberspace is now delivered with less punk and onto the screens of our pocket-sized devices. We all now carry it with us. These Instagram images, too are a dimension of contemporary culture. Though hardly authored the way a Murakami novel might be, the quick snaps and selfies are now pervasive. The logic of their dissemination and the habits of use we have developed in response are both equally symptoms of the technological reality that has begun rewriting our own. Architecture, and its valuation are subject to this unprecedented speed of recording and retrieval. Today the contemporary city, like contemporary architecture, travels far and instantly, as a collection of 2D, 1080 x 1080px images (recently adjusted for retina display capabilities), often snapshots taken for one’s personal scrapbook and casually shared with the public, then “hearted” and “liked,” with their mere exposure being the index of their value. Images of food intermingle with architectural details, saccharin sunsets, and family birthdays—the frameworks that give each of these their value is flattened and made uniformly more personal. We considered the view of Tokyo assembled in such a myriad of images, in order to get a sense of what might be most relevant and enchanting to a statistical multitude. What were the sites that signify Tokyo to a networked global audience, both real and virtual? And if the Nagakin capsule tower is not one of them, how do we prop it up into general view and greater understanding—beyond the love it inspires among its architectural devotees?

The Slowgramming Tokyo workshop rested on two hypothesis. One, that our initial engagement with the instagram portrait of Tokyo would lead us first to a form of “reflective nostalgia” for the depth and the complexity of understanding that has been removed by definition—sinceInstagram indeed promises and delivers an instant record free of time and baggage—and through that nostalgia to criticality about the loss of historical, social, financial and human narratives that go into the production and practice of cities, and with those, also criticality about Tokyo’s contemporary developments.[4] The second hypothesis was that the medium of exhibition was the most effective way for the participants of the workshop to reverse into, or at least cross-pollinate, insta- and slow-, reflexive and reflective, superficial with various forms of depth. Working in the exhibition medium also insured that the outcome of our collective research was, by definition, a discursive product with the capacity to challenge the cycles of recording and retrieving. We hoped it would do so in part by capitalizing on the precise alignment between those cycles and the features of contemporary attention spans.

Architectural exhibitions have been important sites of testing, disseminating, and consensus-building in the field. Just as much as the narrative of architectural modernism is hard to imagine without MoMA’s 1932 InternationalStyle exhibition, the early definitions of architectural postmodernism were deeply indebted to the first Venice Biennale of Architecture in 1980, titled The Presence of the Past. Similarly, the cultural exchange and competition during the Cold War played out in part on the grounds of international expositions and trade fairs, the early 1990s digital turn is unimaginable without its mesmerizing 1:1 installations, and more recently, architectural green-washing got its most in-depth critical review in Behind the Green Door at the 2014 Oslo Architecture Triennale. The contemporary view of architectural exhibitions’ potential for disciplinary contribution varies among curators, who see them as platforms for atmospherics (Henry Urbach), for contextualization (Mirko Zardini),for activism (Barry Bergdoll) and for storytelling (Jean-Louis Cohen).[5] Depending on the cache of the institution, or the curator procuring them, exhibitions tend to also confer value on things (think MoMA again, or the contemporary mushrooming of biennales), but I believe their most valuable function is to provide a highly focused and selective mirror, which might indeed contextualize, tell stories, or transmit an atmosphere in order to move us toward positionality and even action. In the Slowgramming Tokyo workshop we imagined the architectural exhibitions as a form of making public of both architectural research and criticism; and thus an important mode of producing reflections on the discipline, that eventually lead to the strategic preparation for seeing and thinking an alternative—a slower, messier, more loving, and more critical alternative.

[1]The first set of these is loosely referencing several of William Gibson’s novels, but the key one to consider, the cult one to consider is WilliamGibson, Neuromancer (original publication London: Victor Gollancz, 1984). The Murakami list is most closely related to his relatively recent 1Q84 (firstEnglish translation New York: Knopf, 2011).

[4]Late Svetlana Boym distinguishes between two types of nostalgia, restorative, the stuff that nationalism is often made of a kind of return home, and reflective, which recognizes the stuff of the past is gone and thus has the capacity to frame a critical view of the past and of the present. Svetlana Boym, The Future of Nostalgia (NewYork: Basic Books, 2002).

[5]Some of these positions were collected in Log20, Curating Architecture (Fall 2010).